After 3 weeks in the Netherlands and many family visits and other fun activities, I made it back to Lima on May 7th. I've spent the last three weeks in Lima studying Spanish and doing a bit of exploring. I have been taking 20 hours of private class per week at El Sol, a Spanish school which I can wholeheartedly recommend, and have taken a few trips outside of Lima to Lunahuana, Chincha and Pachacamac. I've also seen some more parts of Lima and, of course, tried some more delicious food...!

I've eaten my fair share of Ceviche, a local delicacy made of raw fish, but also managed to eat a whole "cuy" (or in English: Guinea Pig) - quite nice but I never realized how small they actually are! In Lunahuana I went white water rafting and was able to witness the process of making Pisco, the local firewater. Around Chincha I had a look at the cotton fields; with cotton about 9 feet tall and growing very rank, it was quite a difference with Australian cotton! The Chinca area is know for eating cats and they have a cat festival each year; it's not the kind of festival that cats enjoy, if you know what I mean... I stayed a way from trying a bit of cat myself though. I also had a look around the Cienguilla / Pachacamac district close to Lima for a weekend; high mountains, green valleys and a river dissecting it all; just lovely.

I haven't got much other news to share about Lima, seeing as it's already the 5th time that I'm here and my school schedule has provided a pretty good routine this time around. I have also been doing some work here for an Argentinian company and even managed to spend a day back in an office environment... it felt almost strange! I am about to head to the airport to take a flight to Mexico city. The plan is to spend the next 5 orso weeks traveling from Mexico city to Panama; I'm meeting up with a friend in Mexico city but have nothing else planned.... I am excited to explore some new places, see new sights and meet new people... I shall try to keep you all posted!

At http://reinderprins.nl/photos.html you will find the link to some pictures from Peru and Colombia and a new album for Central America as well... hopefully soon to be filled with new pictures... 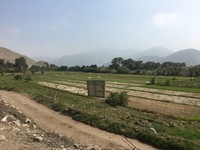 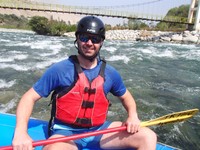 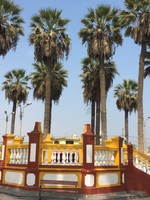 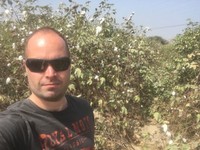 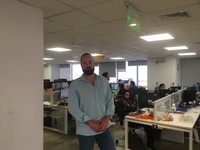 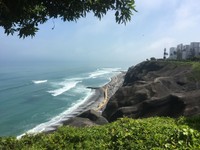 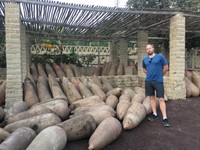 So my time in Medellin flew by! I ended up spending over 5 weeks in this beautiful town; studying full time and of course exploring town as well. I studied at Total Spanish Medellin, which I can recommend to everyone looking to study Spanish, and I think that the 20 hours of private classes per week really helped me improve. I also met plenty of nice people at the school, with whom I was able to sample a few local brews every now and then..

In the last few weeks since my previous blog post, I did go on a few trips as well. I went to explore Communa 13 with the school, which is a very poor neighborhood in Medellin with a big history of violence from the Escobar era until recently. One of the teachers from our school is from this area and she was our guide: it was great to see where the neighborhood comes from and how they are trying to improve everyone's lives. However, when you hear the stories about how the government security forces, up to only a few years ago, used to come in at night, kill people, chop them up and bury them at the local garbage dump, I can understand why not everything is back to peace yet here.. We also had a tour of a famous local cemetery that same week, which was interesting to see and completely different than anything else I've ever seen.

I also went to another soccer game, Medellin vs Nacional - a local Medellin Derby. Crazy, crowded and amazing don't even begin to describe the sensory overload experienced there. I think the stadium was at around 110% capacity and it was literally 90 minutes of full-blown action. The only minus was getting teargassed before the game when we were in the wrong spot in the wrong time, but I did find out that my contact lenses help protect my eyes against teargas similar as they do when I chop unions... who knew?!

On Wednesday April 11th I flew to Bogota for a couple days in the nation's capital before flying to the Netherlands for a few weeks. Bogota is a nice city, but it's pretty cold, it has rained every single day, and it definitely feels less safe than Medellin. You can't for example just take a taxi of the street, and walking around at night is also not recommended by everyone I've spoken to. And as I'm staying in a similar area here as Poblado is in Medellin, I definitely feel that I picked the right city to spend a long period of time in for studying Spanish; I don't think I would have enjoyed Bogota as much for 5 weeks as Medellin. But the museo de oro, salt cathedral of Zipaquira, plaza Bolivar, cerro de monseratte and other areas are pretty impressive though and enough to keep me occupied for a few days.

Anyway, my time in Colombia is almost at an end: I fly to Amsterdam this afternoon if all goes well...! 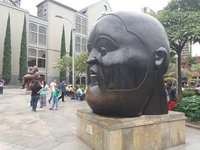 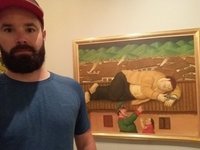 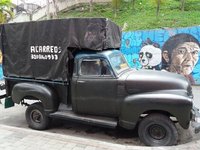 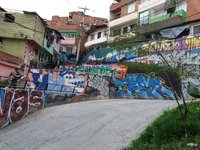 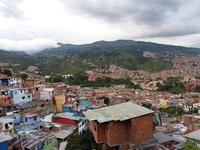 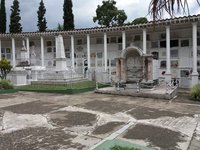 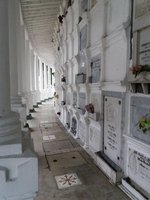 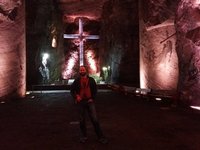 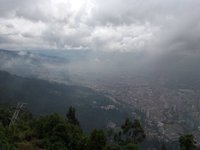 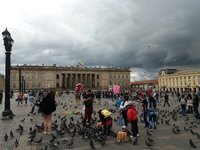 Back to studying full time

I finally arrived in Medellin, Colombia on Wednesday March 7th late at night, after two terrible flights with Viva Colombia; the low cost carrier here. I wondered why the were so cheap when I booked them, well now I know. Their safety rating is fine, but they have never heard of the word service... Medellin has 2 airports and I flew into the international one, which is actually at Rio Negro, 45 minutes from town by taxi.

Now, many people will still have negative thoughts when thinking about Colombia and especially Medellin, many thanks to Mr. Escobar and certain guerrilla factions. I was no exception, although I had been told differently by many people, and I was a bit wary of taking a taxi at night. However, I needn't have worried - everything is very regulated here and I didn't feel unsafe for a second. The driver even stopped for a bit so I could take some pictures of the city from a viewpoint. Similarly, in the last two weeks I have not felt unsafe for one second - although I am obviously staying in one of the better areas of Medellin. However, as long as you know which area you are in, visiting Medellin is absolutely no problem from a safety perspective.

I had organised an AirBnB studio in the center of Poblado and this is where I will stay for the next month. The days after I arrived I took some trial lessons at different Spanish schools and I soon found one that really suits me. So the last two weeks I have been taken 20 hours of private classes per week, which really makes a difference I think. Next to that, the school also organises certain activities like visiting a market or hiking to a viewing point, which is also all in Spanish and thus a learning experience as such. I have met some nice people at the school and have been able to explore the nightlife as well.

The first weekend here however, was pretty quiet: there were parliamentary elections and because of that, no alcohol was to be served anywhere in the country from 6PM Saturday to 6AM on Monday (lay secco) - so not a great weekend to go for a drink. However, that did allow me to get up early to go for a hike for the next morning and explore some other barrios (areas) of Medellin later.

Some of the highlights of the last two weeks:

Today I went to parque Arvi, a national park close to the city. To get here, I took the metro and from there two different cable carts. Quite a nice mode of transport. Here I hiked for a couple of hours, which is a nice change from the hustle and bustle of Medellin (8 million people). The metro is also the lifeline of the city, congestion is pretty bad and the metro, which intersects the whole town, has cable carts that connect to it, thus allowing people that live in the poorer outlying areas easy travel to the center of town as well. After parque Arvi I went to have a quick look at the grave of Pablo Escobar (when in Rome I suppose). However, once you see the impact that this guy had on Medellin, I can't call it a highlight.

Anyway, I'm going for a day trip to Guatape tomorrow and have at least another 2 1/2 weeks left in town... Hasta la vista! 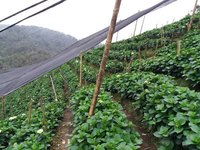 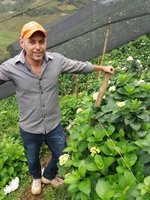 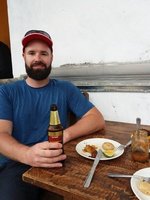 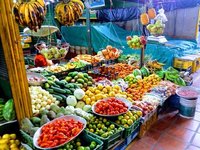 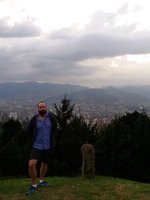 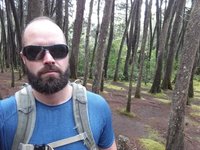 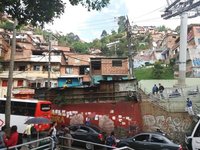 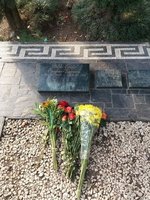 Beginning of the trip

So after tying up all the last loose ends in Narrabri, I finally left for Sydney on Monday February 26th. I flew, with a slight delay, to Sydney and was able to get some last minute shopping done whilst in town. After some final farewell beers and walk on the Coogee-Bondi trail, I returned to the airport on Wednesday February 28th for my flight to Lima. The flight itself was pretty uneventful and due to the time difference I arrived in Lima that same day at 6PM.

All in all I spent a week in Lima, with my friend Charles, in a beautiful part of Miraflores - probably one of the nicest areas in Lima. We did go down to San Bartolomo for the weekend, which is a beach town just 30KM south of Lima. For the rest I just took Spanish classes during the day and enjoyed the town at night. The Spanish school, El Sol, is of very high quality and I enjoy the challenges of learning a language again... my time in Lima simply went too fast, but on Wednesday the 7th of March I flew to Medellin in Colombia. It is my plan to stay here for around 5 weeks and study Spanish full time...!

And then I'm off to South America! The plan is to fly to Lima, make my way to Colombia to study Spanish and then, after a quick detour to Europe, do some more traveling in Latin America... Nothing planned, nothing booked - but so much to go and see!